The town of Korça is located 19 kilometers from the border with Greece and near the Macedonian border, in the southeast of Albania. It has only been officially Albanian since 1913. Before that it has been in  French, Greek, Bulgarian and Macedonian hands, which gives the place a worldly character, more worldly actually than the capital Tirana. Korça is the capital of the Korçë district and the seventh-largest city in Albania. And unlike most cities in Albanian that are littered with concrete structures dating from the communist era,  it is characterized by low rise buildings.

If you have planned a visit to the city, here are the best things to do and see in Korca:

Korçë Cathedral is the largest Orthodox cathedral in Albania. This imposing structure dates from 1992 and is known for the many wood carvings. For example, there are columns and hanging lamps with impressive wood carvings.

Cathedral of the Resurrection in Korca is a real treasure to the eye and cannot be missed when visiting the city. The church was built on the exact locations of another church that was destroying in the time that the country was ruled under a communist regime. Fun fact is that it is the largest orthodox church of Albania, but if that doesn’t convince you, then the large collection of beautiful mosaics inside will.

In the vicinity of the cathedral, you can also find the historical mosque “Mirahor”. This mosque dates from 1494 and is considered a cultural monument of Albania.

The city is known as a museum city. But even though the Korca has many musea to visit, we highly recommend visiting the medieval art museum and the national archaeological museum as these are particularly important. The medieval art museum has a collection of no less than 6500 art pieces.

Wander in the Old Bazaar

The Old Bazaar is without doubt one of the most fun parts of the cities. It is a mixture of cobbled streets and old architectural buildings. Especially in this neighborhood, the city’s Ottoman past is very visible. As the name suggests, you will find several bars, restaurants, and tourist shops here, which makes it a very pleasant area to just wander around. It is also one of the best places to try Qofte, a local Albanian dish that can be described as meatballs, but they are better though.

Okay, since Korca is mainly a city well-known for its museums, you simply can´t miss this one either. This is the place to be if you want to learn about the Albanian culture and the language. The museum is located in the building that was used as a school in 1887. Actually, it was the first school ever in Albania. The museum showcases the struggles that come with learning the Albanian language as it is a very complex one.

Get a panoramic view of the city

When you get a birds-eye view of Korca, you will have to admit that the city has an idyllic location as it is surrounded by mountains. Fortunately, there are a few ways to get a panoramic view. The RED tower is a popular sunset location to get an amazing view during the golden hour. There is an entry fee of about 50 Lek, but it’s well worth it. If you don’t want to spend money on an entry fee, we have a different suggestion. Go for a drink or have dinner at the Sky Kafe, one of the most famous eateries in town. It is located close to the Orthodox church and by climbing a few steps you can reach the top of the tower and get a great view.

Albania has a reputation gained by its beer production. If you have traveled across Albania already, you will have noticed that Korca beer is one of the most popular beers. And as you guess, the beer factory is located in Korca. You can order one of the beers in a bar around town, or visit the brewery and learn about the production. Some claim it is the best beer in the Balkan, but we let you decide. What we can tell is that if you are a beer lover, we recommend the month of August to visit Korca, as this is the time when the Old Bazaar or Pazari i Vjeter is the setting for one of the greatest cultural events dedicated to the beer.

As is always the case when visiting a city during traveling, it is fun to get away from the crowds for a while and enjoy a great walk. Rinia Park is the largest park in Korca and a beautiful location to wander or relax.

When stepping outside the orthodox cathedral, you will find yourself in St George boulevard. This street is lined with apple trees, shops, and bars. In the daytime, this boulevard may be very crowded because of the high number of bars and shops, but in the evening the boulevard is more peaceful. Also, Albanians have a long tradition of making evening walks after a long day and St George Boulevard is a favorite amongst locals. This is also the street where you will find the National Museum of Education.

Make a day trip to the nearby mountain towns

Korca is located close to the mountains, so it would be a shame not to spend a day (or more) in one of these mountain towns. Voskopoje is a local´s favorite and is known for its many churches. Nowadays there are still about eight churches dating from the 16th and 18th centuries, but there used to be 24 in the past. Another possible day trip is to the mountain town Dardha or to Lake Prespa. 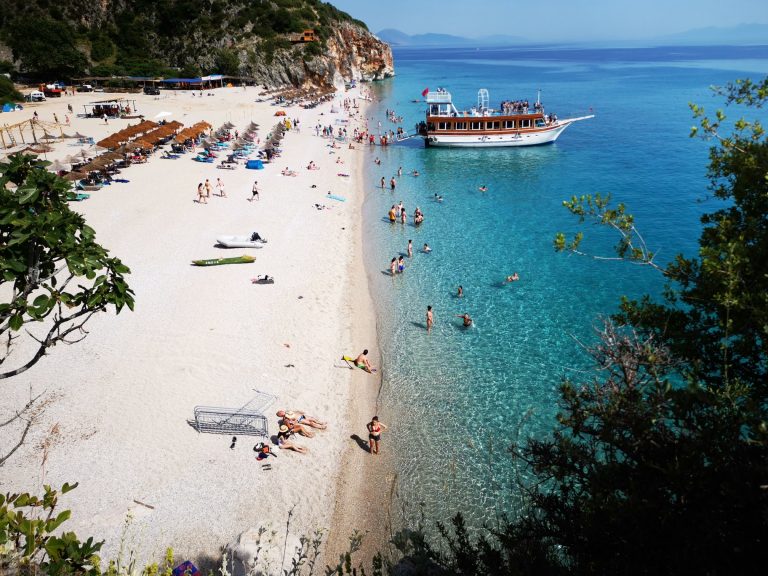