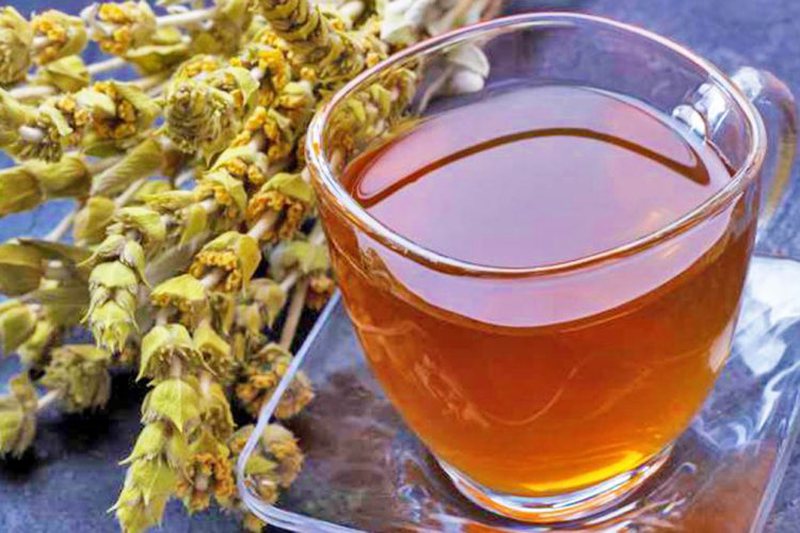 It is not, in reality, a real tea, but a plant that grows in the mountains of the eastern Mediterranean. Its botanical name is Sideritis syriaca. In English, it is also known as shepherd’s tea. In Italy, it is known as Albanian or Greek tea.  In Albanian is known as mountain tea (alb: Caj Mali )

The plant is collected and dried in bunches, using everything (stem, leaves, flowers) making an infusion as for a normal tea, preferably served with lemon and honey. It is a very popular drink in the southern Balkans (Greece, Albania, Macedonia, Bulgaria).

It blooms between May and July above 1500 meters in the mountains of Albania and neighboring countries. Its flowers are hermaphrodite, with a yellow corolla. The pollination is entomophilous.

The species is native to Eastern Mediterranean countries: Albania, Syria, Turkey, Greece, Crete. In Italy, it is widespread in Umbria, Marche, Lazio, Abruzzo, Molise, Campania, Puglia, Basilicata, Calabria, and Sicily (on the Madonie).
It grows between 1500m and 1900m in environments of garrigue or Mediterranean prairie.
It prefers sunny exposures and well-drained calcareous-sandy soils.

In Albania and Greece, it is used to prepare a herbal tea called “çaj mali” in Albanian and “Tsai vounìsio” in Greek, i.e., mountain tea.

It is excellent for relieving sinusitis, colds, coughs and is an excellent iron supplement.
How to prepare it…

Take 2/3 pieces of grass, and cook them in boiling water for 2-3 minutes. Alternatively, pour boiling water on top and leave to infuse in the covered cup for 10 minutes. It is excellent both hot and cold.