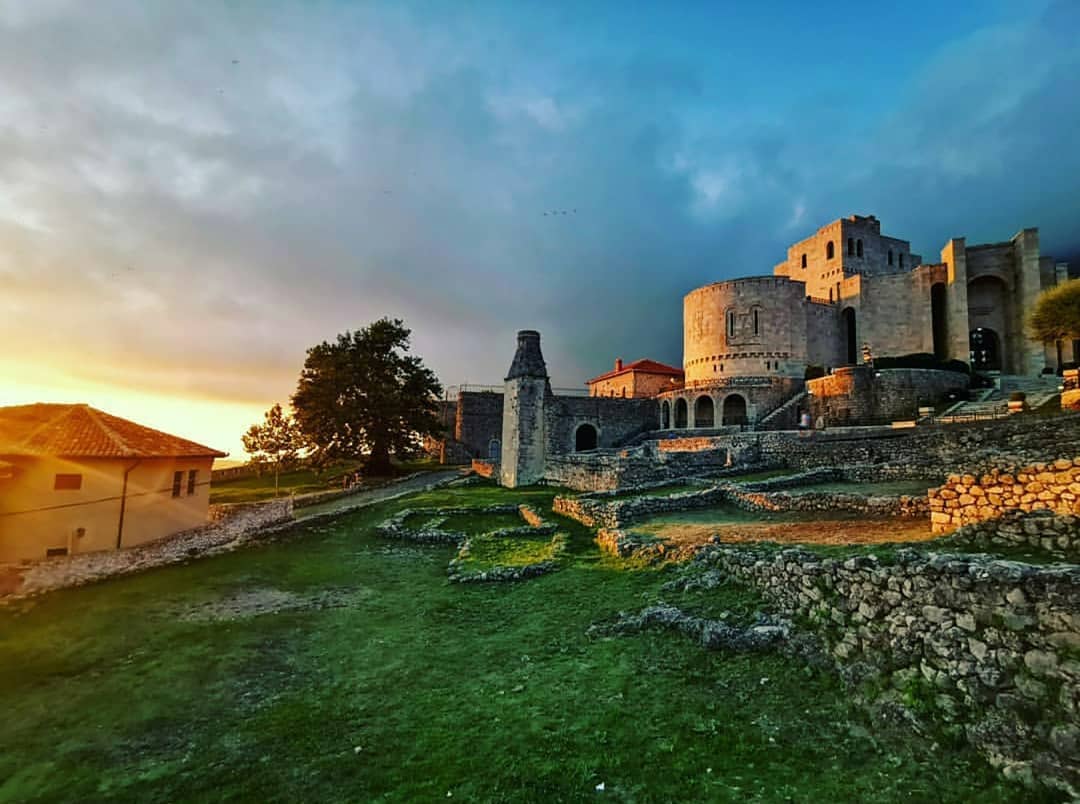 The medieval charm of Kruja

Kruja, the ancient Albanian capital, just 32 km from Tirana, is the city symbol of the anti-Ottoman resistance and the city of the national hero Scanderbeg.

The citadel is geographically part of central Albania. It extends picturesque, thanks to the thick scrub covering the surrounding hills, at the foot of the west side of the homonymous mountain that overlooks the underlying plain placed as an intermezzo between the Adriatic and the mountains, offering a panorama spectacular.

It is immediate to see, as you embark on the road to Kruja, the picturesque natural mosaic that offers the interweaving of mountainous, hilly and rural reliefs, in which the oak and pine woods stand out.

Unfortunately, the black hand of globalism did not hesitate to challenge nature’s generosity, ruining the idyllic landscape with the deep quarries for the extraction of limestone.

Even before reaching Kruja, one should not forget a white hill in the village Zgerdhesh , which despite the simple appearance, was an ancient Illyrian settlement inhabited by the Albanians from which then (at least according to the main sources, but with some reserves in this regard) also derives the Albanian name with which the Shqipetare are known all over the world. The first evidence of Albanopolis and Albani dates back to the second century. Ptolemy cites B.C. as a famous Illyrian tribe.

The ancient city extended approximately over an area of ​​ten hectares on a hill surrounded by defensive walls. On the top of the hill, the acropolis was defended by high walls with towers.

The golden age of this tribe dates back to the third century. B.C.

It is believed that the name Kruja derives from the term  “krua,” that is,  “water source,” very numerous throughout the city and characterized not only for the freshwater that comes down from the mountains but also for the shade created by the ancient oaks.

Historically Kruja has always played a central role also thanks to its geographical position as a meeting point of the roads that connected the north, south, west, and east, which allowed the development of trade by attributing to the city also a dominant role over all neighboring territories.

Based on the archaeological discoveries in the area (Sesere), the first urban traces date back to the III century. B.C.

The continuity of life and economic and social development in the early Middle Ages is testified by the cemetery findings and in the area of ​​the fortress, including decorative objects, various containers, and terracotta objects.

In historical documents, we find Kruja and its fortress named for the first time in the 10th century Notitiae Episcopatum. B.C. and in other Byzantine ecclesiastical documents.

Between the XII and XIII centuries, it was part of the Principality of Arberia and experienced the greatest development in the times of Prince Dhimiter.

In 1338 Kruja came under the control of Tanush Topia and later reached its most prosperous period under Karl Topia, called “Lord of all lands of Arberia,” with Kruja as the most important center.

In 1437-1438 Kruja passed under the banner of the Kastrioti, including the national hero Gjergj Kastrioti or Scanderbeg, who, leaving Turkey, returned to his homeland proclaiming himself lord of Kruja on 28 November 1443, thus began the Albanian resistance against the Ottomans.

In fact, in the fifteenth century, under the leadership of Scanderbeg, Kruja attracted the attention of all Europe since, with its resistance, it stood as a defensive barrier and prevented the access of the Ottomans to the rest of Europe, thus defending Christianity for as many as 25 years from Ottoman terror.

The Ottoman armies surrounded it three times, led by great strategists and even by the sultans themselves, including Murad II and Mehmet II. Still, nevertheless, they did not succeed in subduing it.

What can you visit in Kruja :

The fortress of Scanderbeg remains a symbol of the glorious medieval period. The castle is located on a rocky ridge on the eastern side of the city. Before the earthquake of 1617, the rock was attached to the Kruja mountain; following the earthquake, it detached, taking on its current appearance due to the clay layer on which it rests.

Thanks to its favorable position, the castle has an extensive overview that ranges between the Adriatic Sea, Tirana, the Dalmatian coasts, etc.

The construction of the castle dates back or at least is believed to be in the 5th-6th century. d.C. * (4). It has two entrances; the main one currently accessible consists of a stone tunnel. In contrast, the second entrance of lesser importance is located on the west corner, leading to the source of Taslloi, one of the oldest in the city, obviously protected by thick walls and two towers, fragments of which are still preserved.

Inside the castle, near the entrance door, we find the “Gjergj Kastrioti” Museum.

All covered in marble, it was inaugurated in 1981 and is a journey through the history of the city of Kruja over the centuries. In particular, it is a tribute to the history of Scanderbeg and its resistance against the Ottomans, a source of pride for all Albanians. In fact, at the entrance to the museum, you immediately come across an unusually high marble statue depicting the hero and his soldiers in war clothes.