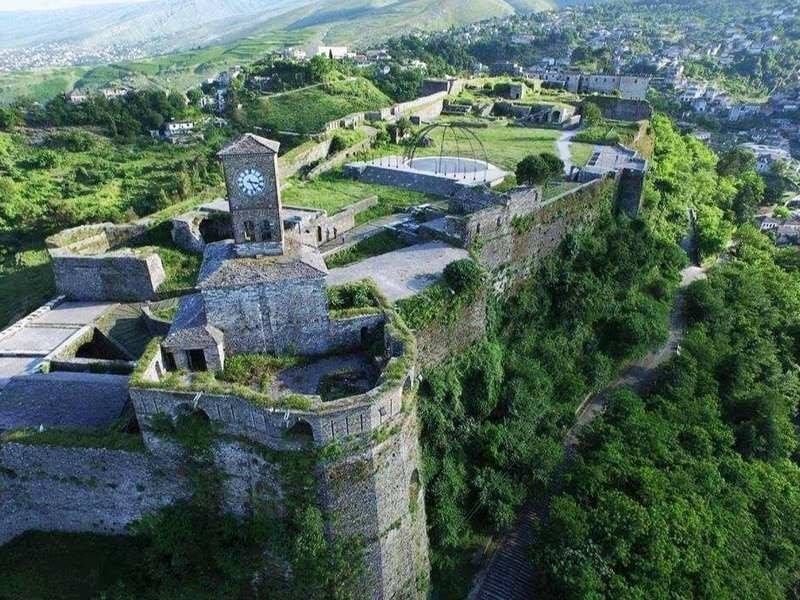 Gjirokastër (Gjirokaster) is one of the most important cities in Southern Albania, declared a World Heritage Site by UNESCO

Perched on the eastern side of the Montagna Larga (Mali I Gjërë), the city of Gjirokastër was founded as a castle in the fourth century; castle, which is now the largest in Albania. Inside the fortress, you can find the Museum of Weapons, where weapons from different periods are exhibited up to the Second World War.

The origin of the city begins with the castle of Gjirokastra, built in the 4th century AD.

The city took the name of Argyrokastro in 1336. In 1417 it was conquered by the Ottoman army. It then reached its peak in the period 1800-1830, when the characteristic Ottoman houses were built.

The main peculiarity of Gjirokaster is the intensive use of stone in the construction of the houses, which resemble small fortresses, with the cobbled streets that all lead to the Bazaar. Here you can also visit the Bazaar Mosque, built-in 1557. Given all these characteristics, Gjirokaster is also known as the “Stone City.”

Let’s explore the best thing to do and see in Gjirokaster :

In the period of the communist dictatorship, Gjirokaster became a museum city because of the birthplace of the leader Henver Oxha.

A story, made of wars and foreign occupations that well represents the historical story of Albania in its long journey for independence.

The weapons, from those of the dominations of antiquity to those of the anti-Ottoman revolts, to those of the Royal Italian Army and the Wehrmacht, the invaders, and finally those of the communist partisans, first liberators then in turn oppressors of the Albanian population,

The presence in the main halls of sculptures, often of the regime, paintings, and photos of men and women in tractional clothes embracing rifles and pistols, first against the Turkish invaders then against the Nazi-fascist oppressors, symbolizes the will of the Albanian people to reach their independence.

the carcass of a US military reconnaissance jet, a Lockheed T33, captured in December 1957 when it had to land on Albanian territory due to a technical failure when in the cold war period the country was aligned with the countries of the Warsaw Pact; now the aircraft is exposed in the parade ground of the castle.

The crew was interned in Albania until an exchange of prisoners was possible.

This museum housed local homewares and was built on the site of Enver Hoxha’s former house, in the middle of the Old Town. Its collection is interesting if you’re a fan of local arts and crafts, but don’t come expecting anything about Hoxha himself.

Gjirokastra’s eerie hilltop castle is one of the biggest in the Balkans. There’s been a fortress here since the 12th century, although much of what can be seen today dates to the early 19th century. The castle remains somewhat infamous due to its use as a prison under the communists. Inside there’s a collection of armory, two excellent museums, plenty of crumbling ruins to scramble around, and superb views over the valley.

The ‘Neck of the Bazaar’ makes up the center of the Old Town, but what were once artisanal workshops are today mainly tourist souvenir shops. There are a couple of stone carvers left at the top end of the bazaar.

Famed for its intricate, fortress-like Ottoman mansions, it’s also known as the birthplace
of dictator Enver Hoxha and Albania’s most influential, Nobel-nominated writer Ismail
Kadare (Chronicles in Stone is a must-read). Protected by the status of “museum town,”
Gjirokaster survived socialist modernization campaigns and is today inscribed in the world
Heritage list.